This new house design proves sustainable and eco-friendly living doesn’t have to come at a steep price when materials of choice are all recycled and natural.

When Gus Anning and Sarah Rowe built an Earthship-inspired house in a secluded valley on the Coromandel Peninsula, their materials of choice were reclaimed, recycled and natural. Earthships are eco-conscious homes that incorporate solar power and on-site water treatment. They are usually built by the owners with the help of a community of volunteers.

“Sarah and I discovered Earthships through the documentary The Garbage Warrior, which was about architect Mike Reynolds who started building these types of homes in the US about 40 years ago,” says Gus.

The pair, who met five years ago and are a blended family with three children, named the land Te Timatanga, which means ‘the beginning’. As is the modern way, the couple launched their idea with a Facebook page to coordinate a series of workshops where experts would impart their knowledge. It didn’t take long before they had a crew of interns keen to lend a hand while learning natural building methods using mudbricks and cob, and other skills such as how to make glass bottle walls. “The Earthship concept is wholesome, intelligent and attracts a lot of good people,” says Sarah. “We had more than a hundred people from all over the world working on site over the length of the build.”

Harriet Pilkington of Young and Richards, advised by specialist consulting architect Graeme North, provided fully detailed plans for the four-bedroom home that would satisfy all the requirements of the New Zealand Building Code. Graeme North periodically attended the site to observe the work. Its footprint is an extended rectangle which hunkers into a bank and is glazed the width of its front to take maximum advantage of solar gain. Once the paperwork was complete, a squad of workers were at the ready and all was set for the long, hot summer of 2015, and the start of a true labour of love.

Grounding the build properly was essential in an area where there is so much rainfall. Running continuously behind the rear tyre wall and under the reinforced concrete slab is a waterproof Permathene membrane. A thick layer of mussel shells acts as natural insulation, which was then covered by two old sails to protect the important vapour barrier. “Making sure our house passed the standards of the New Zealand Building Code was a challenge,” says Gus. “We had to come up with acceptable alternate solutions the council was happy with.” 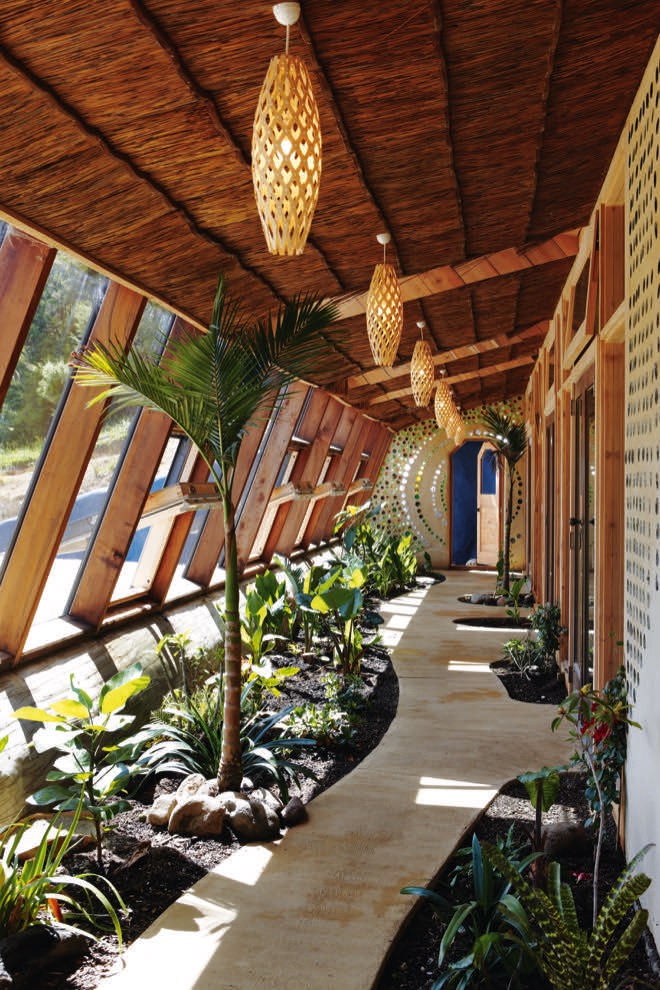 Once the foundations were set, the team began to fill 1300 recycled tyres with dirt. Pounding this earth to compact it was gruelling work in the heat. The tyres form the structural backbone and act as a thermal regulator. Next, the tyre wall was packed out with natural cob made from clay, aggregate and straw, and then rendered. “Who would have thought it would be so much fun to build our own house with earth and by hosting a huge mud party all summer with so many nationalities?” says Gus. Second-hand mudbricks bought for a song were used for the internal walls. Non-toxic and fireproof, they were a lucky find.

Integral to the Earthship ethos is the control of ambient temperature without the need for air-conditioning. Tubes that run under the floor to the north work by convection, cooling the home in summer. Warm air rises through the roof windows in the conservatory, sucking fresh, cool air into each of the rooms. 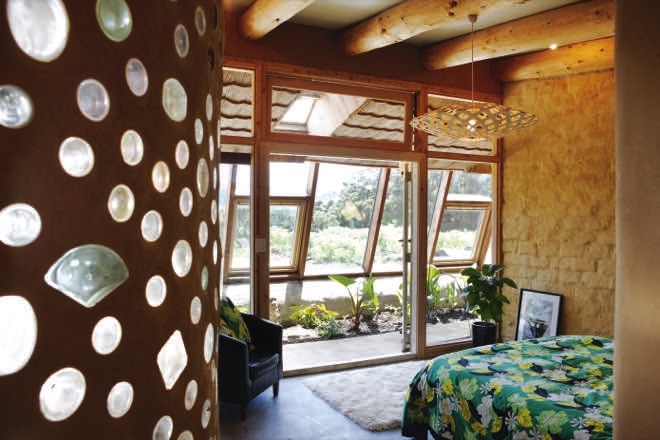 At the end of the summer, a roof of chunky timber beams topped with New Zealand-made Thunder Grey Colorsteel insulated panels was in place. Nevertheless, the build was far from complete and the house still not enclosed. Moving into autumn, when the team was depleted by a loss of the volunteers, things were looking grim. “We decided to pay some of the interns to help us finish,” says Sarah. One day, children from the local school also pitched in, rendering the walls by smearing them with mud. “Bryony and Toby’s classes followed the project from the start. They learned about recycling and building with rubbish.”

While sustainability takes precedence in Earthships, the designs are also aesthetically original and have moments of pure magic. Bottle walls, in particular, are a much-loved feature and at Te Timatanga, these bring decorative delight to several rooms. They were mainly made up of large wine and olive oil bottles gathered from the local tip. Each bottle was measured, cut, washed then taped together to form a ‘brick’. Thousands were prepared in advance and then placed in mortar.

Nine months in the making (rather like a pregnancy), and this masterpiece of creative thought was ready to be occupied. Among its special features is a corridor with a thatched ceiling that runs the length of the front of the home. Here, a pathway is edged with an internal garden. Further into the home, the jarrah kitchen bench is a tactile fulcrum around which much of the family living takes place. Tadelakt plaster walls in the bathrooms capture a sense of the casual while, externally, a river rock border anchors the manmade to the land. 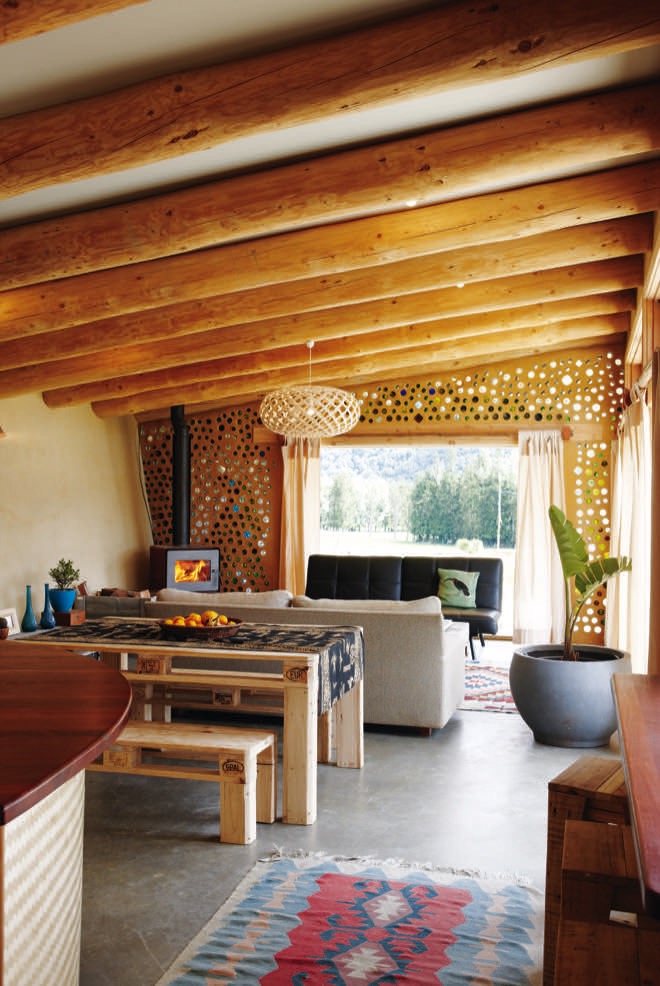 “We love living here,” says Gus. “Being enveloped in natural materials has such a calming effect on the whole family.” With a garden of tropical flowers and palms set against a backdrop of the Coromandel Range, the home feels like a South Pacific paradise.

All up, the house cost around $340,000 including excavation. Te Timatanga is a testament to community and collaboration, built on solid foundations to withstand the huff and puff of many storms to come. It’s a showcase of what is possible when you dream big, roll up your sleeves and get started.

We step inside designer Kenneth Cobonpue’s family home — a creative haven that celebrates indoor-outdoor living in style
0 Shares
0
0
Architecturally designed with family living in mind, this Oran Park duplex by Oscar George Projects ticks all the boxes
0 Shares
0
0
This modern Northern Beaches home provides the perfect environment for carefree relaxation, with no compromises in design or quality
0 Shares
0
0
Designed for narrow lots, this Hamptons-inspired narrow lot home has all the style, space and sophistication you could want
0 Shares
0
0

This dramatic custom designed 3 bedroom, 3 bathroom home is the pinnacle of modern living.
2 Shares
0
2
A family building their extraordinary new home on a prestigious Mosman site opts for quality over quantity.
7 Shares
5
2