A beautifully engineered combination of old and new, this New York apartment by Ochre exudes all the calm of a rustic countryside farmhouse despite being situated in one of the busiest metropolises in the world.

From London to Paris to New York, Ochre, originally from the UK, has spanned the continents, bringing its beautiful collections of furniture and design along. The two founders, Joanna Bibby and Harriet Maxwell Macdonald, met at art school and were soon inspired to put their design ideas into practice.

Their collections are made up of a broad selection of furniture pieces and accessories — from lighting to upholstery to kitchenware — all of which manage to strike a naturally beautiful balance between old and new.

Ochre is also expert at interior design. This particular apartment in the buzzing city of New York encompasses all that the company is. The apartment is a classic Soho loft built in the 1860s and is situated on one of the most sought-after corners of the city. It spans the blocks from Crosby Street to Broadway, giving the apartment the unique feature of two entrances. The Broadway entrance is therefore also part of the living area, enabling guests to enter the house without walking through the rest of the apartment.

As for the other aspects of the layout, Ochre found these took some careful consideration. The previous owner had been a potter and had divided the space to suit her lifestyle, working at the front of the building and living at the back. When redesigning to suit the needs of family life, it made much more sense to reverse this and place the living area at the front, with sleeping areas tucked away at the rear. To implement such a huge structural change, Ochre had to gut every internal wall and found that none were original and had all been installed during the ’80s.

As the apartment was built in the 1860s, it has some special features. For example, exceptionally tall ceilings and massive windows that face west. It also has a large set of windows at the back that look out over an original courtyard. These were unique elements that Ochre was keen to retain, which meant nurturing already existing imperfections that came with the old building. Ochre knew that it could easily be completely refurbished, doing away with original fixtures to bring in new and modern elements to freshen up the place, but that’s not what was wanted. To create another “modern box”, as Harriet says, is not what Ochre’s about. Instead, they allowed the imperfections to flow and guide the design, and this is what really gives the apartment its charm.

Other elements that the design team tried to rescue and reuse were the original ceiling and walls. They also attempted to refurbish the original Douglas Fir floor, but “after a lot of effort and expense, Ochre had to throw in the towel and lay an inexpensive pine floor,” explains Harriet. Sad to let the idea of the original floor go, the designers implemented a very effective special wash that helped the new floor look softer and older. They weren’t afraid to include some traditional accents such as the beautiful John Soane fireplace (made by Chesney’s) as well as the super-modern Italian kitchen by Valcucine.

One of the truly stunning features in the space is the colour scheme and from the outset Ochre had a very specific idea in mind. Keen to create that antique yet modernised look, they spent time carefully selecting soft greys and browns. These colours, which easily could have made the space feel cold and inhospitable, work in the opposite way, creating a warm, alluring and approachable space that’s nothing short of inviting.

What we love about this space…

– The front living area’s large windows, which date back to the 1860s and the gorgeous Arctic Pear chandelier by Ochre, as well as the de Le Cuona linen and blinds by Knowles and Christou.

– The fumed oak dining table with a cast-bronze base by Ochre and painting by Jeri Ledbetter.

– The kitchen’s large eucalyptus wall light and ceramics in shades of jade green and blue by Canvas.

– The large Eclipse chandelier, Scorpion lamp and Zeffirelli chair in white, all by Ochre.

– The metal coffee table by Canvas paired with a pink armchair.

– The sleek bathroom features, especially the antique glass mirror above the bath.

– The bedroom’s white ash bed and a Moroccan tadelakt lamp, both by Canvas.

Lockdowns have had us all looking for new hobbies, and ways to make some extra cash. This was the case for an Adelaide-based man who made approximately $5000 on Gumtree by upcycling furniture found on the street
0 Shares
0
0 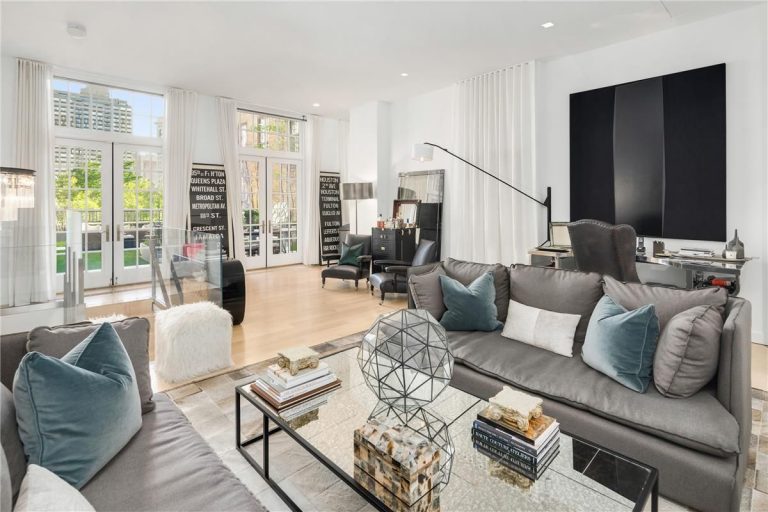 It looks like Jenny will be moving off the block, as Jennifer Lopez lists her Manhattan penthouse for US$27 million.
2 Shares
1
1

Australian plantation shutters offer a range of benefits to just about any room of the home. Here are just a few reasons why they may be right for you
7 Shares
4
3

A family home with an extremely busy bath-time routine, had outgrown their small bathroom which consisted of a shower and bath. The client, working in the cosmetics industry, had an abundance of samples and required additional suitable storage.
0 Shares
0
0
When traditional light solutions no longer work for you, design with Magic.    The way we perceive an…
0 Shares
0
0
Sandra Skelly, General Manager at Comfort Heat sheds light on some of the burning questions that arise when deciding on underfloor heating options for your home
1 Shares
0
1