When your block is in a location as desirable as the Noosa hinterland, there are some compelling considerations when it comes to designing a home to go on it. First, the house must respond to its setting and be special enough to deserve it; it should suit the semi-tropical lifestyle; and, finally, it will need visitors’ digs, because you can be very sure they will come.

This blended family were already guaranteed regular visitors in the form of their two adult children, who still live in the city. With their 13-year-old, the couple decided to move to Queensland from Sydney in search of a completely different lifestyle — and a home that would both suit and help create their new life. The Tinbeerwah plateau is on the high point of the first ridgeline of the Noosa hinterland, so there are views aplenty, both to the coast and to majestic Mount Cooroy. Yet, the region is only a 15-minute drive to the buzzing resort town of Noosa and the charming villages of Eumundi and Cooroy. With state forests surrounding it, the Tinbeerwah area is very popular with nature lovers, too, for its walking and riding tracks.

This little slice of Tinbeerwah, once part of an alpaca farm, is a long plot, little more than two hectares, with remnant bushland in the centre and magnificent views to the mountain — a quintessential Noosa hinterland setting. As the Wallaby Lane block is unserviced, the new home had to be self-sufficient for water and sewerage management, as well as space- and energy-efficient. “A building that could deliver both practically and emotionally was paramount,” says architect Jolyon Robinson.

Large land area doesn’t necessarily mean a huge house. Size can also be dictated by factors such as aspect, neighbours, lifestyle needs and, especially, budget. Funds for the project were limited, despite high expectations, and the natural aspect was west, which attracts fierce afternoon sun in this part of the world. So the house plan was pivoted to the north, its envelope designed to follow the contour of the land.

Other challenges were the sloping topography, existing neighbours, remnant bushland and delays from a prolonged period of rain that ultimately resulted in the family, including the dog, opting to live on-site in the bush studio, which was completed first. “So, for better or worse, they were eyewitnesses to the building process,” says Jolyon.

As to the style of the home, “The client had spent some years living in Bali and is an admirer of modern tropical buildings,” explains Jolyon. “The design was to include a pool and cater to indoor/outdoor living in a subtropical climate.” Most importantly, “The house was to be nurturing and uplifting.”

The house sits quite high on the site and its plan is linear to follow the land’s natural contour. There are three bedrooms in the main house, a bathroom and ensuite, a large open-plan living/dining area and a pool and sauna. There’s also a separate self-contained studio at the other end of the site, where guests can retreat to.

The floor plan is spacious yet compact as no space is wasted. With its orientation to the north, the design includes large eaves and a flyover skillion roof clear of the building to shade the home. Cross-ventilation works well to capture cooling breezes and banks of clerestory windows allow natural light to flood in. Beautiful views to the mountain and surrounding bush are maximised.

The platform of the building sits on natural ground and a suspended polished concrete floor throughout the living areas provides thermal mass, with low-E glass and large eave overhangs making the internal climate very comfortable in hot weather. Both fixed and operable shade devices assist further with climate control. The timber screens provide an earthy contrast to the steel, particularly the screen to the ensuite, which ensures shade and privacy and makes a beautiful feature in itself.

The house harvests its own water and an on-site water-treatment system manages sewerage for both buildings, even though they are well separated by bushland. The studio has its own water tank. The home’s connection to its environment is both aesthetic and practical.

The last word goes to the architect:

“At its heart, Wallaby Lane’s strong and simple linear plan makes it a pure and beautiful building that, through its contrast and restraint, complements its hinterland context.”

We couldn’t have said it better.

In a hot climate, a cantilevered flyover roof will help keep things cool

This customised modular home makes the most of its location and provides the owners with every comfort they could ever possibly need.
0 Shares
0
0 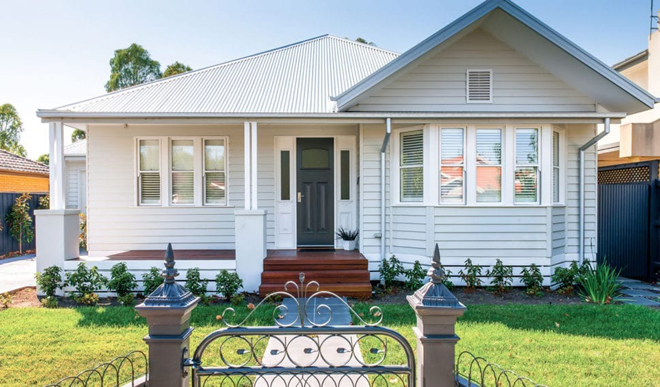 Many of our clients have built properties with custom home builders before and know what they want in their new custom designed abode
0 Shares
0
0
Stacy and Joe Spagnolo have found peace and beauty among the vines in their new home in NSW’s…
8 Shares
0
8
Colourful, cohesive and current, this Mondrian-inspired house came together perfectly for a Sydney family.
8 Shares
1
7
With a nod to its natural surroundings, this home provides a space to be proud of for its new homeowners
0 Shares
0
0